I’ve blogged about Boerewors in the past, probably because it is such a good sausage and likely because I have such fond memories of visiting South Africa. The first time I arrived in South Africa was on tour with a band I managed in a former life. We had just gotten off the 14 hour direct from Atlanta to Johannesburg. The promoter, and my now good friend, picked us up from the airport and whisked us away to his family home at the time. We hung out and relaxed with some Rooibos tea and watched them grill a large coil of Boerewors. It was served with Pap, and Chakalaka and it was all quite good. It was a heck of a way to kick off our 2 weeks in country.

Traditionally, Boerewors is made with bush meat. Some sort of wild game that is ground with a little bit of pork. It is seasoned with black pepper, coriander, clove, allspice, nutmeg and sea salt. It is rich, dark, earthy sausage that has pops of brightness from the fragrant spices. Every hunting season I will make Boerewors with Whitetail. In fact, we just waxed off our last 5LB rope of it! At Old Major, we make it with grass-fed / grain-finished beef and a little pork, both of which are antibiotic and hormone free. The sausage is usually found in ropes, not links. Boere goes great with Chakalaka, a sauteed mixture of onions, bell peppers, garlic, tomatoes, and baked beans. Add a side of Pap (fluffy corn poridge) and you have a pretty good dinner! Don’t want to make pap or chakalaka? Sauté some onions and get some grainy mustard. Or if you like blasphemy, ketchup works…. at least my kids think so.

I’m not South African, but based on my experiences in SA and my limited interactions with South Africans in the United States, if you had to pick one food that would immediately transport someone back home to South Africa, Boerewors would be it! We’ve had numerous South Africans tell us that our Boerewors reminds them of a grand parent that used to make it from scratch. Or it simply reminded them of home. I can’t think of a higher compliment. This week, if you are out at the farmers market, stop by one of our booths and pick up a package of Boerewors. If you can’t make it to a market, we can ship it to you as well! 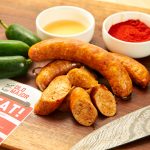