I can’t remember the first time I had Pozolé but I remember really enjoying it. It is such a flavorful, hearty stew! The soup has a pretty long, and unique history originating with the ancient tribes of Mesoamerica. It was (and is) a very special soup, or stew, because it uses so many ingredients that take time to prepare. One of these ingredients being Hominy. Hominy is corn that has gone through a chemical process to remove the husk of the kernel itself revealing the tender inside of the corn kernel. The chemical process isn’t super crazy, it’s simply a soak in a diluted lye solution. Historians have dated hominy as far back as the 12th century. It was produced by boiling the corn in water with some wood ash (which produced lye). The boiling produced foam, which is where the original tribal word for Pozolé came from.

But here’s where it gets a little dicey, pre-Spanish conquest, the tribes would make pozolé only for very special occasions, and it was generally reserved for the tribal elite. It was made to celebrate the God Xipe Tótec who was flayed to protect agriculture, fertility, etc. and historically the meat used in the sacred stew…..one of the other extra special ingredients…… was human.

Yes, in fact when the Spanish conquered and colonized the area, they came to find that often warring tribes would make the stew with the leg of a warrior from the defeated tribe. Under Spanish rule, cannibalism was outlawed and this is when the primary protein in the stew shifted from homo sapien to pork or chicken.

Needless to say, when we make Smoked Pork Pozolé, we leave the human out of it. But our humans love to make it. We start with scratch made chicken stock, using water, whole chicken frames, mirepoix, garlic, bay, and time (physics not spice). The bone broth is the base that is blended with charred poblano, onions, tomato paste, garlic, smoked pulled pork (we make a lot of this), jalapeno, ancho, and of course, Hominy. The soup is so good because the flavor is built in layers over time until you get this behemoth of flavor. It is earthy, smokey, savory, slightly spicy, and filling. If you’ve never had it, try it. We are pretty proud of our recipe! This week’s Dinner for Two comes with corn tortillas and chihuahua cheese to make a couple quesadillas and Maria is going to whip up her special green sauce for dipping the quesadillas.

Dinner For Two is a high-quality, affordable, and delicious ready-to-heat meal for two adults that are too busy to cook or simply don’t want to! The menu changes weekly so it’s always new. Skip the dishes on Thursdays, we’ve got you covered. Give our dinner for two a try this week! 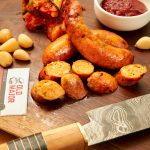 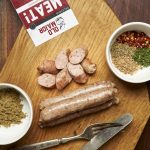